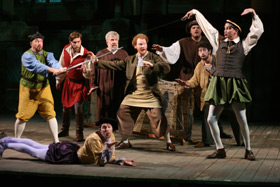 LAWN SEATING UNDER THE STARS!

“A grand production in a great venue!” – Splash Magazine

Shakespeare’s greatest (and largest) comic character, Sir John Falstaff, was too huge to be contained by his original appearance in Henry IV. Short on money, the rotund Falstaff sets out on a quest to seduce not just one, but two wealthy married women…who then decide to turn the tables on Falstaff and teach him a lesson in fidelity and honesty.