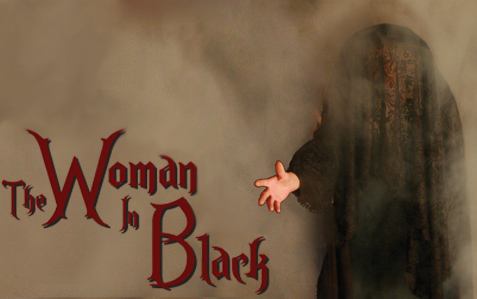 By Stephen Mallatratt, based on the novel by Susan Hill
Directed by Alison C. Vesely

“a delicious, handcrafted thriller of the classic style… do not miss this intricate, intimate production!” – ★ ★ ★ ★, Chicago Stage Review, read review

“a go-to thriller… you’ll never see it in a setting as appropriate as the Peabody Mansion, long rumored to house a supernatural presence or two.” – ★ ★ ★ , Chicago Tribune, read review

“One of the most brilliantly effective spine-chillers you will ever encounter.” – London Daily Telegraph

Proud and solitary, Eel Marsh House surveys the windswept reaches of the salt marshes beyond Nine Lives Causeway. Arthur Kipps, a junior solicitor, is summoned to attend the funeral of Mrs Alice Drablow, the house’s sole inhabitant, unaware of the tragic secrets which lie hidden behind the shuttered windows. It is not until he glimpses a wasted young woman, dressed all in black, at the funeral, that a creeping sense of unease begins to take hold, a feeling deepened by the reluctance of the locals to talk of the woman in black – and her terrible purpose. Years later, he recounts his experiences to an actor in a desperate attempt to exorcise the ghosts of the past. The play unfolds around the two characters as they act out the solicitor’s experiences on Eel Marsh all those years ago…with chilling consequences.

Click on the thumbnails below to view the full images fromThe Woman in Black.