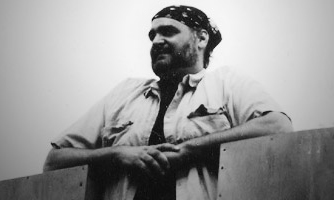 Our dear friend and colleague, Dan Allar, passed away on January 10th, 2009 after a long and courageous battle with cancer.

He worked as a stage manager for Much Ado About Nothing, Driving Miss Daisy, Richard III, Hamlet, The Taming of the Shrew, and on stage as Banquo in MacBeth. He also stage managed all four of First Folio’s school touring shows last season.  Dan’s acting credits included work at the Goodman, Chicago Shakespeare, Drury Lane Oak Brook, Court, Drury Lane Evergreen Park, Candlelight, Forum, Apple Tree, Organic, Pheasant Run, and most recently as Sam Byck in the Jeff Nominated ensemble of Assassins (Porchlight Theatre). His films include Rooter in Henry: Portrait of a Serial Killer 2 – The Mask of Sanity and Charlie in Chasing Robert. Mr. Allar played in two episodes of Early Edition (CBS), one ofWhat About Joan? (ABC), and he played Avocado onPrison Break (FOX). Last December he performed with the Chicago Symphony Orchestra at Orchestra Hall and at Carnegie Hall in Bartok’s The Miraculous Mandarin. Dan had worked at Bradley University as the Technical Director and Scene Shop Foreman, doing set and props design for Drury Lane Evergreen Park, and as the Stage Manager at the Apollo Professional Theatre. He resided in Westchester, with his wife Gwen, and their children Garrett and Isabella.

Dan will be greatly missed by all of us who worked with him at First Folio, as well as the entire Chicago theatre community.